How to Decipher Japanese Addresses

(I originally wrote this back in 2002, but the original site has since fallen off the internet. Here is a slightly updated version.)

If you spend enough time wandering around Tokyo, you will undoubtedly run across fliers or billboards that identify stores that you'd like to visit. The problem is: given an address, how can you figure out where the store is located? Addresses in Japan are not laid out as familiar StreetName+Number combinations.

If you're staying in a hotel with English-speaking staff, you can ask them for help. However, since that's not always an option, this section briefly covers how to break apart Japanese addresses and find them on the map. This discussion assumes that you have a good map like the Tokyo City Atlas available. To practice reading addresses, here is a scan of a flier from Mandarake. Note that this flier is from late 2001, so the information may no longer be accurate!

The flier identifies 6 stores, but only 3 of them are in the Tokyo area. The simplest way to weed out the non-Tokyo stores is to look at the phone number - if it begins with "03", then it's definitely a Tokyo store; if it doesn't, then it might be in suburban Tokyo or it could be in some other part of Japan. (Note that if you're reading addresses off of billboards, then you probably don't have to worry about this since you're not likely to encounter many out-of-Tokyo addresses.)

Since the upper left store satisfies the "03" requirement, let's investigate that address further. It is:

Focusing on the bottom three lines (where the address is), we have:

The first line (with the black background) tells you which train station to use - the 駅 character (eki = train station) follows the name of the train station, in this case 中野 (Nakano). The rest of this line says that the store is a 5 minute walk from the north entrance of this station.

Now, if you can find Nakano station on the map, you're in good shape. But not all train stations are easy to find (Nakano is an exception), so we can pretend that we don't know where to look and continue taking apart the address.

The second line doesn't say much: まんだらけ is the name of the store (Mandarake), 中野店 (Nakano-mise) simply means "Nakano store", and the phone number isn't much good unless you know enough Japanese to carry on a phone conversation.

The last line gives the information that you need to find the store. Ignore the postal code at the front and verify that the address begins with 東京都 (Toukyou-to) - this indicates that the address is indeed located in Tokyo. Checking these characters is better than relying on the "03" heuristic given above since the outlying areas of Tokyo do not use the 03 telephone prefix.

Now skip ahead until you find the 区 (ku) character. The characters immediately before this character identify the "ku", or ward, in Tokyo. There are only 23 of these wards in Tokyo and you can find a listing of all of them on page 4 of the Tokyo City Atlas. Because there are only 23 of them, you can easily scan through them to find the matching ward (even if you're not very good with kanji). The listing on page 4 also gives a pointer to the pages that contain more detailed maps of the ward. 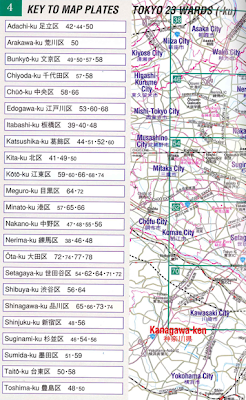 Nakano-ku can be found on page 56. In the following image, Nakano-ku is outlined in red: 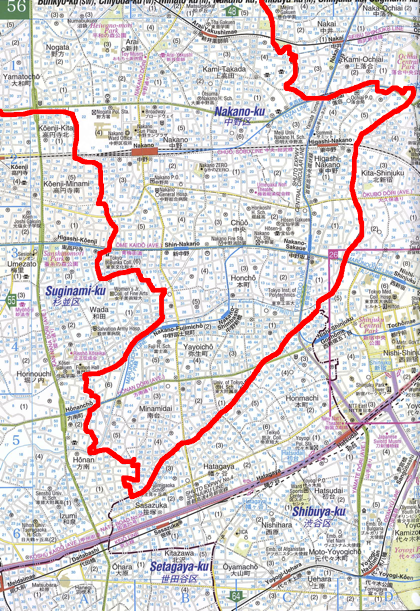 The rest of the address is the city name (中野 = Nakano) and the numbers (5-52-15) which identify the building within that city. Nakano is easily found within Nakano-ku - it's the area around the train station (outlined in blue in the following image). Nakano is further divided into 6 districts (called 丁目 choume) and we're looking for district 5 (the first number from our 5-52-15 address). In the Tokyo City Atlas, the districts are identified by black number in parentheses, so we're looking for (5). This is the upper-central part of Nakano, just north of the train station. 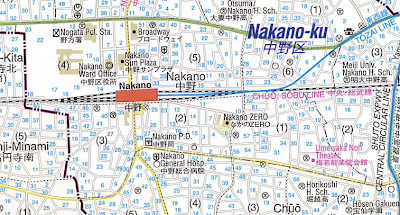 Within the district, we can now look for the second number, 52, which is the block within this district. The blocks are marked in blue but, because this map is lower detail that the ones earlier in the book, not every number is noted on this map. The closest number is 51, but that's close enough - you can go to that area and walk around until you find the store.

On additional piece of information that we can use is up in the little map that they give on the flyer. Right beneath where is says 中野まんだらけ (Nakano Mandarake), there is a second line: ブロードウェイビル２F〜４F (buro-dowei biru 2F - 4F = Broadway Building 2F - 4F) which means that the store is located in this building. The Broadway Building is marked on the map (right next to the blue 51), so we have confirmed that we've identified the right place.

The last number, 15, is the exact building address. In practice, I haven't found this number to be very useful when looking for stores. Keep your eyes open and wander around the area and you should be able to find it.


For reference, here is the same address shown in Google Maps: